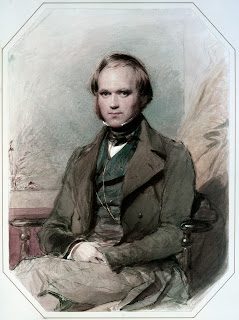 Charles Darwin is well known to the world for his theory of natural selection, which showed that animals evolved over thousands of years and species changed to adapt to their environment. Darwin’s insight happened because of what Charles saw on the Galapagos Islands. He kept his theory to himself most of his life because it disagreed with peoples’ religious views about creation.

Darwin was born February 12th 1809 in Shrewsbury, England.  He was the fifth of six children. He grew up in a very wealthy family due to his Dad being a doctor as well as a financier. When Charles was eight years old he started taking a great interest in history.  He also started collecting all sorts of insects.  Later in the year, his mother died.  After a few years of boarding school, his Dad, Robert Darwin, convinced him to go to medical school. Charles found the lectures very boring.  He couldn’t stand the sight of blood and fled during a surgical amputation he observed being performed on a child.

Charles dropped out of medical school and his disappointed and angry father, sent him off to Cambridge College for a Bachelor of Arts degree.  After being at Cambridge for a few months and not finding any real passion, his cousin introduced him to collecting beetles.  Soon, he started collecting beetles and he became good friends with John Henslow, who was an important biologist in the community.

When Darwin came home on August 29th he received a letter from Henslow proposing a place for him aboard the HMS Beagle with ship captain Robert Fitzroy. The ship would chart the South American coastline and the trip was estimated to take two years.  His father, however, did not want him to go on the expedition. He said it would be a big waste of time.  After lots of debate, Charles’ Uncle Josiah Wedgewood ended up convincing Robert to let Charles go on the trip and also agreed to fund his participation. 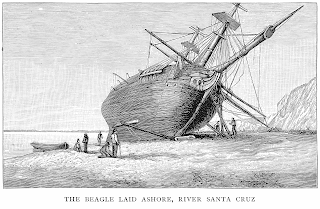 The voyage began on December 27th 1831 and ended up lasting almost five years.  During the voyage Darwin took lots of notes on his observations of all the specimens he was collecting such as, spiders, butterflies, birds and seashells.  The Beagle sailed all the way around South America stopping every few hundred miles at locations such as Bahia, Rio de Janeiro, Montevideo, Falkland Islands, Valparaiso and Callao Lima and finally the Galapagos Islands.

When Darwin got to Galapagos he was shocked to find that all the wildlife such as Marine Iguanas, Penguins, Sea lions and Giant Tortoises on the islands were completely different species from what he’d seen in South America.  He found the Galapagos Islands to be very unpleasant because of the volcanoes and the island’s rocky environment. When Charles returned home he wrote a book called Voyage of the Beagle recounting what happened and also what he had collected over the trip. After his book got published he married Emma Wedgewood, his first cousin.

Charles and Emma were very happy together.  Charles spent many years raising a family of 9 kids although three of his children died of unknown illness.  He concentrated on studying barnacles and increasing the size of his beetle collection.  In 1859, Darwin’s mentors, Charles Lyell and Steven Henslow, encouraged him to publish his book, Origin Of Species, describing his Theory of Evolution.  They were afraid that someone else would get credit for the idea if Darwin did not publish his book.  Darwin had been thinking about the idea for 22 years but was fearful his theory would offend people.
Emma was very religious so Darwin understood on a deep level how his ideas contradicted religious views about creation.


The Galapagos Marine Iguana is the only species that swims and also lives on the beach. They mostly live on Fernandina and Isabela islands.  Most adult male iguanas can grow up to 5.6 feet while females normally grow to be 3.3 feet.   The Marine Iguana is not very agile when it's on land but when it's in the water it's a very fast swimmer because of its flat tail.

When Darwin visited Galapagos he described them as "imps of darkness" and thought they were very ugly. He tripped over them constantly as there were hundreds of them all over the beaches.  Marine Iguanas are cold blooded and can only stay underwater for between 20 to 30 minutes.  They lay on the beach in the sunshine to absorb warmth.

They mostly feed off of algea and seaweed with very sharp claws and teeth.  Although they can't drink salt water they have special filters in their nose that take the salt out of the water.  Male iguanas also change color becoming red, green and blue to attract female iguanas during their reproductive season. 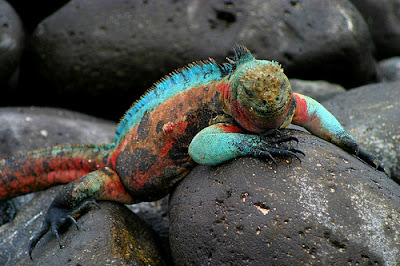 Posted by Unknown at 2:20 PM No comments: